Jordan Cove and Oregon LNG, plus Plymouth LNG that blew up in March: Spectra and Williams are running 36-inch pipelines through the Pacific Northwest to LNG export terminals. Is it coincidence that their 36-inch Transco and Sabal Trail pipelines through the southeast go right to LNG export operations? Columbia and Rogue Riverkeepers remind us states have water and air permitting authority for pipelines, and don’t forget local governments have zoning authority, plus landowners can hold out for much better offers.

From Spectra’s Westcoast Pipeline through the fields of the countersuing Chilliwack, BC farmers, and Williams’ Washington Expanstion Project down I-5 past Seattle, Tacoma, and Olympia, turn right at Woodland, Oregon, because:

Columbia Riverkeeper has a lengthy dossier on Oregon LNG, including:

We plan to intervene in the FERC process, and we continue to urge the states of Oregon and Washington to stand up for our communities and to defend vigorously the rights of each state to review and, if appropriate, deny the Oregon LNG proposal.

Canadian suppliers? As in Spectra Energy via Sumas, Washington?

Rogue Riverkeeper has a lengthy dossier on the Jordan Cove LNG terminal in Coos Bay, OR, including:

After seven years of advancing LNG import applications, the proponents behind the Jordan Cove terminal and Pacific Connector pipeline withdrew their LNG import proposal in early 2012. In June 2012, the companies began their application process for a LNG export proposal, which had long been suspected to be the real purpose. The public admission of the true intent of this proposal was a huge development in this campaign and allows us to not only articulate the problems with, and fight against, the real proposal but it also allows us to take part in the larger national discussion currently taking place on energy policy and security, fracking and climate change.

And unfortunately, according to Brandon Baker in Ecowatch 25 March 2014, Feds Greenlight LNG Exports From Controversial Jordan Cove Project in Oregon, 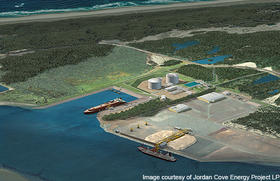 The Jordan Cove project includes building an export terminal that would be supplied by the proposed 235-mile-long Pacific Connector pipeline, crossing public and private land in southern Oregon to connect to existing pipelines from British Columbia to California. The DOE says the project is subject to federal environmental and regulatory reviews, but organizations like the Sierra Club and Rouge Riverkeeper hope it doesn’t get to that point.

The groups are publicly reminding citizens and legislators that the State of Oregon can reject the terminal and pipeline under laws like the Clean Water, Coastal Zone Management and Clean Air acts. 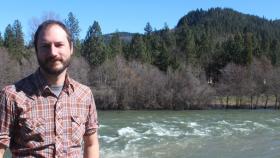 “Private property would be taken via eminent domain, rivers and streams would be harmed and forests would be clear-cut for the construction of a 235-mile pipeline to an export terminal in Coos Bay,” Rouge Riverkeeper writes in a petition. “Southern Oregon deserves better and Governor Kitzhaber needs to hear from you.”

How about we stop the Sabal Trail pipeline before it takes anybody’s land through eminent domain, and fracked methane goes through it and gets exported from Florida? See that above? FERC does not have sole say. The states have to decide on permits, and local governments also have zoning authority.

More about Jordan Cove from that Williams Co. PDF:

So Williams can’t keep up with export demand through its intended west coast LNG export terminals. Hey, what if somebody builds a 36-inch pipeline to the Florida coast for LNG export from there? Somebody like Williams (Transco) and Spectra (Sabal Trail) plus FPL (FSC)?

But in the Pacific Northwest let’s not forget:

And incidentally Plymouth, WA is conveniently on the Columbia River, so maybe it doesn’t even have to be on the coast for LNG export. Be that as it may, Columbia Riverkeeper certainly drew a connection, as Bob Heye reported for KATU 1 April 2014, Explosion at Wash. LNG facility raises questions about terminal near Warrenton,

Dan Seres of Columbia Riverkeeper says an LNG terminal in Warrenton is just too dangerous.

“It’s too much risk to pose to that kind of community,” Seres says, “So what we’re asking the state to do is to really fully assess this risk. I mean they had to evacuate a two-mile radius around that facility in Plymouth—a facility that’s much smaller than the Oregon LNG project.”