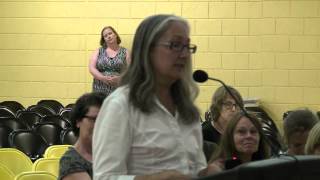 FERC’s scoping meetings seem just as much a farce at the other end of Williams’ Transco pipeline from the Hillabee Expansion (PF14-6) that would feed Spectra’s Sabal Trail (PF14-1), Williams is pushing its Atlantic Sunrise Project (PF14-8) to suck up more Marcellus Shale fracked methane from Pennsylvania and ship it down here to Alabama, Georgia, and Florida and out through LNG export. Activists up there videoed several Pennsylvania Scoping Meetings, so you can see the show for yourself.

Spectra Energy and NextEra Energy’s planned Sabal Trail natural gas pipeline from near Transco Station 85 in southwestern Alabama to near Orlando in central Florida will do more than provide additional gas-delivery capacity to Florida and the welcomed redundancy of a third pipeline to the Sunshine State. The big news is that Williams’ Atlantic Sunrise project by July 2017 will enable large volumes of Marcellus-sourced gas to be shipped south (backwards!) along the Transco pipeline all the way to Station 85. That (and Sabal Trail) will give Marcellus producers something unthinkable until now: access to major gas users as far south as Miami. Today we lay out the basics of what is being planned.

Here’s a geologist complaining Williams Co. didn’t provide sufficient map detail to tell what seismic activity or sinkholes it might intersect. Same problem here with the fragile karst limestone containing our drinking water Floridan Aquifer. He was only one of many speakers against: they went on for 4 and a half hours without a single speaker for the pipeline. That was 4 August 2014 at the Student Memorial Center at Millersville University, 21 S. George St., Millersville, PA, according to videographer Leland T Snyder, who includes more information in his YouTube comments. 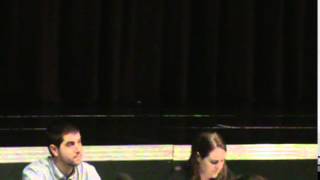 And it includes one in Williamsburg, PA, with Christine Allen from FERC and Meghan Safford(?) of Williams Company FERC didn’t make her spell her name like they did the citizen speakers. Whatever her name is, she spelled out that the purpose of the Atlantic Sunrise project is to push methane southwards along the Transco pipeline. And she said they’d heard from more than 250 people in their Open Houses and now were “making good progress”. Just like Spectra’s Andrea Grover and her “moving on” op-eds in Florida and Georgia newspapers. And no mention of the many reasons not to move on, such as that the lucrative market is LNG export, which would drive up domestic natural gas prices? You get the impression these pipeline companies and FERC are all reading from the same script? 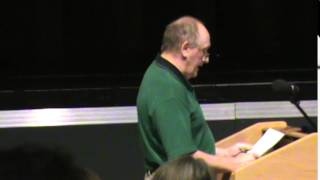 FERC and Williams didn’t mention any downsides, but the very first citizen speaker did call them on LNG export.

Such a wonderful name, Atlantic Sunrise! Oddly used for exporting gas to other states.

Only point four percent (0.4%) of land owners in Columbia County may receive a financial gain. The other 99.06% will not receive any financial benefit whatever, but will receive the harms.

He also said elected officials are basically representing the pipeline company instead of their own citizens.

There’s also video of a scoping meeting in Lehman, PA, including reports of silica sand blowouts into wetlands. Not something we want down here in our fragile karst limestone Floridan Aquifer. And the first speaker also called them on LNG export. More detail in Gas Drilling Awareness Coalition‘s YouTube comments.

Same problems and threats from pipelines in many U.S. states and Canadian provinces, coordinated by a small number of big pipeline companies, rubberstamped by FERC and FE. As Bill Huston says:

The ONLY thing that will defeat a project like this
is a MASS MOVEMENT OF PEOPLE.

As part of that mass movement, here’s the playlist: