The incident occurred Sept. 26 near the intersection of Furniss Road and Fishing Creek Hollow Road, where Williams is building a 20-inch pipeline in a 40-foot right of way from the expanded Wildcat Point gas-fired power plant in Cecil County, Maryland, to the existing Transco interstate gas pipeline near Holtwood.

Clatterbuck said he was filming vehicles to disprove Williams’ claims that the project is bringing jobs to Pennsylvania residents. All of the license plates, he said, were out of state.

District Judge Stuart J. Mylin, who heard the appeal Friday before a standing-room-only crowd of Clatterbuck supporters, said the professor was charged with a specific subsection of the disorderly conduct code indicating he created “a hazardous or physically offensive condition by any act which serves no legitimate purpose of the actor.”

While some testimony suggested Clatterbuck might be guilty of “criminal trespass or defiant trespass,” Mylin said, that was not the charge against him.

The prosecution relied largely on the testimony of one man, Christopher Brooks, a chief inspector for the gas company, who said Clatterbuck was blocking traffic, walking within the construction zone, disrupting workers and “screaming at me, using profanity.”

But no one presented any evidence that the “motoring public” was inconvenienced by Clatterbuck’s presence, Mylin said. Given the charges, he added, he would expect testimony that the defendant “chained himself to a tree or threw himself in front of a bulldozer.”

The prosecution, led by state police Trooper Kelly Osborne, “failed to meet the burden” of proof, Mylin said. “Defendant is not guilty.”

Outside afterwards, Clatterbuck — surrounded by a crowd of jubilant supporters — said he was happy with the decision.

“I would have been surprised if it went the other way,” he said. “This was not even a close case.”

The bad news: that such charges could even be brought in the first place, for standing on a public right of way taking pictures of parked cars.

The worse news: that’s just a small example of how tilted the legal playing field is in favor of fossil companies and against local citizens. WWALS v Sabal Trail & FDEP shouldn’t evan have been a close case, either, yet the judge ruled for Spectra Energy from Houston, Texas, claiming local citizens who have fished, swum, and boated in the Suwannee River for generations didn’t even have standing. 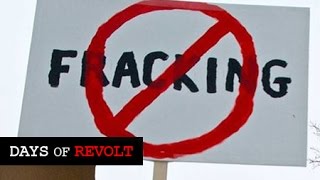 This interview with Clatterbuck about the scope of the problem may sound a lot like what we’re all facing here in the southeast.

Published on Dec 8, 2015
In this episode of teleSUR’s Days of Revolt, Chris Hedges speaks with attorney Thomas Linzey and activist Mark Clatterbuck about the grassroots movements rising up against the fracking industry, and the legislative and direct action necessary to resist corporate power in the absence of a true democratic system.

The Atlantic Sunrise project they’re talking about is a Williams Co. project fronted by the same individual as the Williams Transco Hillabee Expansion Project, and it’s pretty clear Atlantic Sunrise is meant to feed fracked methane from the Marcellus Shale in Pennsylvania to Cove Point LNG export in Maryland, Elba Island LNG export in Georgia, and Sabal Trail (LNG export? Why Sabal Trail knows nothing about that!).

Here’s more about that Community Bills of Rights they mention. It’s is a variation on the county and city ordinance idea.

Sure, as they say in the interview, there are issues with Big Green, but Sierra Club has been very useful against Sabal Trail, and we’re helping drag them into opposing natural gas more than they were. See the Sierra Club meeting just this past Saturday at Suwannee River State Park, for example.

Here’s my humble opinion, which culminates in a really simple point: no new fossil fuel projects; renewable energy instead.

It links to two petitions that started up northeast, and goes farther, in pointing out that FERC is not the only problem: FE and MARAD can also approve LNG export. And of course petroleum products pipelines such as Palmetto are mostly state decisions, not FERC.

So, opposition is by various means coalescing across north America, across pipeline projects, regardless of which pipeline companies, and against multiple federal and state agencies. Are we having fun yet, Sabal Trail?