A resident who lives next to the proposed compressor station site, and Gordon Rogers, Flint Riverkeeper, were among those seen in this meeting and not in previous Dougherty County meetings.

About a year ago is when the county first learned Sabal Trail’s interest in bringing a natural gas pipeline to the county. There have been several meetings since then to get the community involved.

County commissioners, former commissioners, and other officials say the pipeline won’t bring any jobs or money to the area and they warned of the noise and annoyance it will cause.

Jennifer Maloney is a resident who spoke out and said 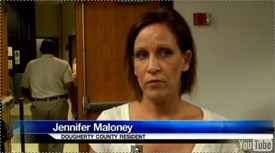 this will affect her the most because she lives right next to where the compressor station would be located. Maloney told FOX 31, “We’re going to have to relocate out of the county, out of the state, and completely re-adjust my life and our lives and my career. Our property value is going to be diminished.”