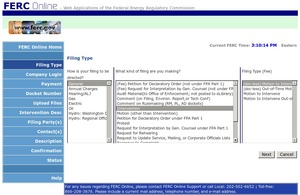 county along the proposed Sabal Trail pipeline path between Auburn and Gainesville reminds everyone of the Christmas Eve filing deadline.

Residents wanting to file comments with the Federal Energy Regulatory Commission about the Sabal Trail pipeline have until Dec. 24 to do so….

The docket to review and file comments with FERC is CP15-17.

In both dockets, comments from Sabal Trail, citizens, and governments from Valdosta, Lowndes County, Dougherty County and Colquitt County, among others can be found, with commenters discussing the impact of the pipeline on the area.

The Times attempted to contact FERC secretary Kimberly Bose about the deadline Friday but was unable to do so.

I added the links.

In addition to filing comments on Sabal Trail FERC Docket CP15-17, or even better a motion to intervene, it would be good also to file on the other two parts of the Southeast Market Pipeline Project: Docket CP14-554 for Florida Southeast Connection (from Orlando to Martin County, Florida) and Docket CP15-16 for Transco’s Hillabee Expansion Project (in Alabama, to feed fracked methane to Sabal Trail).