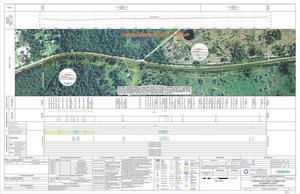 Property rights, environment, or safety? 14% pipeline company profit is more important! said FERC. But this fight is not over.

Without ever appearing on FERC’s public calendar, and a month in advance of when FERC previously said, FERC yesterday issued certificates for Sabal Trail, the Transco Hillabee Expansion Project, and Florida Southeast Connection. Trial-style evidentiary hearing? Nope, FERC believes Sabal Trail. Consolidation of the three dockets into one? Nope, everybody should have opposed all three, says FERC. Environmental justice? Hey, demographics don’t matter, pipeline siting is all about engineering and “environmental” issues. And profit. Don’t forget profit for the pipeline companies. Solar power? Nevermind, END_OF_DOCUMENT_TOKEN_TO_BE_REPLACED

This is in Sierra Club’s END_OF_DOCUMENT_TOKEN_TO_BE_REPLACED

Two weeks for all the public meetings, rushing to make the 20 November 2015 final EIS notice date, 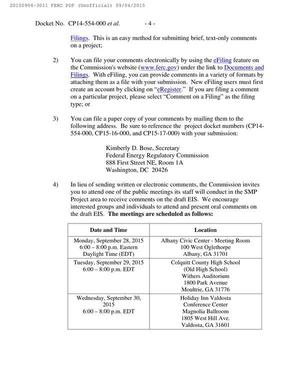 The Draft EIS released Friday 4 September 2015 is very long, but the most basic question is very short: why is FERC rushing to rubberstamp the unnecessary, destructive, and hazardous Sabal Trail pipeline and its fracked methane siblings Hillabee Transco and FSC when there’s neither need nor public benefit?

The Sunshine State should go straight to solar power.

If you don’t want any of these pipelines, you can send in your comments both to FERC and to state and local agencies and elected officials in Georgia, Florida, and Alabama, and show up at these FERC meetings to protest. You can also still file a motion to intervene with FERC. And don’t forget to call Georgia Gov. Deal. 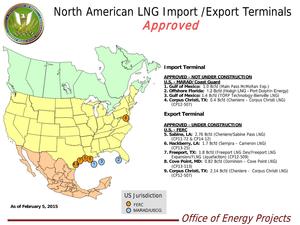 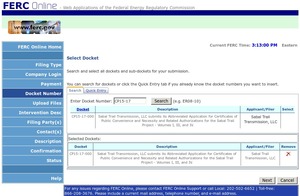 Be sure to file in all three dockets: CP15-17, CP15-16, and CP14-554. It’s not enough to list them in your filing documents or description: you must file them on each docket. If you don’t find your filing in FERC’s docket search for each of the three dockets, you need to go back and file again in the other dockets. Here’s how to file for multiple dockets in a single END_OF_DOCUMENT_TOKEN_TO_BE_REPLACED

county along the proposed Sabal Trail pipeline path between Auburn and Gainesville reminds everyone of the Christmas Eve filing deadline.

Residents wanting to file comments with the Federal Energy Regulatory Commission about the Sabal Trail pipeline have until Dec. 24 to do so….

END_OF_DOCUMENT_TOKEN_TO_BE_REPLACED

LNG “storage, vaporization and truck loading facility” FGS just spelled out that it wants gas from the end of this pipeline chain in Florida, in its motion to intervene on Sabal Trail’s FERC docket.

Remember, FGS’ apparently PCB-contaminated site is on the same Warfield Blvd as FPL’s Martin County “Clean Energy Center” and as LNG-export-authorized FLiNG Energy’s storefront, with an FPL pipeline running right down that same road. And FLiNG says it is “located immediately adjacent to Floridian Natural Gas Storage”. Do you still claim, Sabal Trail, that your fracked methane isn’t for export?

This motion is even simpler than FGT’s motion to intervene. Remember: file before 24 December 2014.

How simple a motion to intevene can be: organization name, contacts, and Basis for Intervening. Filing to intervene gets your foot in the door for any further filings or legal actions or participation in hearings. It does not require filing major legal documents at the outset (or ever). It does require filing your motion to intervene by 24 December 2014. It would be prudent not to wait until the last day: you never know when FERC’s efiling system might be down. 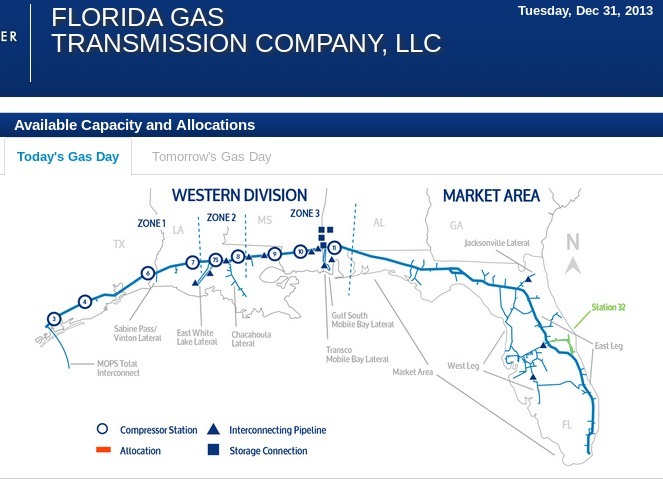 This motion to intervene is by Sabal Trail’s competitor Florida Gas Transmission, which is, according to Kinder Morgan:

FGT didn’t mention in this filing, but it knows sinkholes. Just a year ago FGT had to move its pipeline off of the famous 25-acre sinkhole in Assumption Parish, Louisiana.

Back in May Sabal Trail and FSC argued fracking wasn’t relevant to their pipelines. How can they argue that now that FPL wants to frack frack Oklahoma for methane for those pipelnes proposed to gouge through Alabama, Florida, and Georgia?