Tudor Pickering cut shares of Spectra Energy Corp. (NYSE:SE) from an accumulate rating to a hold rating in a research report sent to investors on Wednesday morning, TheFlyOnTheWall.com reports. The firm currently has $32.00 price target on the stock, down from their previous price target of $42.00.

What went up in the summer has been coming back down since: 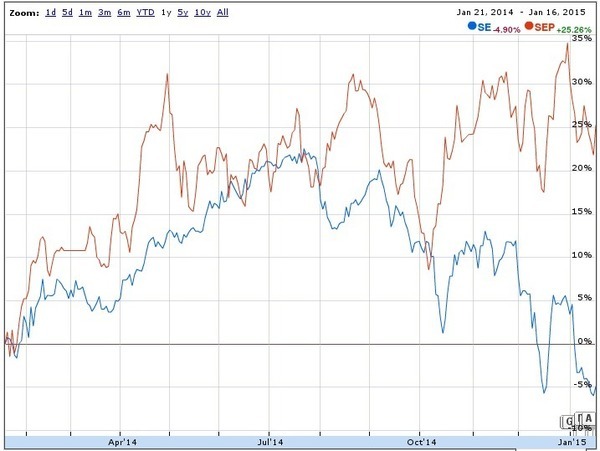 In the United States, climate change action is evolving at state, regional and federal levels. The Supreme Court decision in Massachusetts v. EPA in 2007 established that GHGs were pollutants subject to regulation under the Clean Air Act. Pursuant to federal regulations, we are currently subject to an obligation to report our GHG emissions at our largest emitting facilities, but are not generally subject to limits on emissions of GHGs, (except to the extent that some GHGs consist of volatile organic compounds and nitrous oxides that are subject to emission limits). In addition, a number of Canadian provinces and U.S. states have joined regional greenhouse gas initiatives, and a number are developing their own programs that would mandate reductions in GHG emissions. Public interest groups are increasingly focusing on the emission of methane associated with natural gas development and transmission as a source of GHG emissions. However, as the key details of future GHG restrictions and compliance mechanisms remain undefined, the likely future effects on our business are highly uncertain.

Maybe we’re seeing some of those effects already.

Break out the popcorn! The comment deadline for the EPA proposed methane rule is Monday 9 February 2015, and the preceding Thursday Spectra CEO Greg Ebel will explain it all!

Already back in March 2014, Greg Ebel was struggling to explain why his company didn’t have more pipelines deployed, even though some of the news media redacted the part about the export market being the real customer. Maybe he’d like to explain about those three already-permitted LNG export operations right where the Sabal Trail pipeline leads in Florida?

Maybe he’d like to explain how not only is Spectra building a pipeline to an LNG export terminal in British Columbia, but in its Canadian environmental assessment it said it might put two pipelines on the same right of way? What would stop Spectra from doing the same thing on the Sabal Trail right of way?

Maybe Spectra’s CEO would like to explain how it can claim to be a sustainable company when it fracks watersheds for a greenhouse gas 20 times worse than carbon dioxide and then gouges huge rights of way under rivers and through forests and fields, taking people’s lands for Spectra’s leaky pipelines?

Analysts think Greg Ebel’s got some ‘splainin’ to do.