About Kinder Morgan trespassing 1.7 miles into land owned by Billy Morris, who also owns the newspapers in Augusta and Savannah:

In early May, when Kinder Morgan surveyors visited the property, they were promptly told to leave and accused of trespassing. A local deputy who was called to the scene wrote in a police report that a Kinder Morgan supervisor told him: “You can’t stop the pipeline, they have enough money to push the pipeline through the county.”

It was like pumping gasoline onto an already raging fire. The company apologized, but those words would be repeated again and again at town hall meetings arranged by the company to calm nerves about the project. 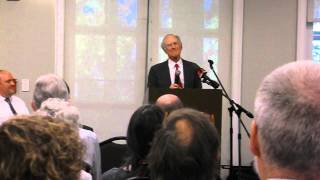 “Their intentions seem to be to force this pipeline down our throats, regardless of how it affects us,” Morris said at a raucous town hall meeting in Waynesboro five days later.

Within days, Gov. Nathan Deal came out, forcefully, against the proposal. He has not waded into the other projects and often professes a desire to steer clear of sticky local matters. But his administration points to vexing questions about the project, including how much of the fuel will end up marketed in Georgia.

Well, Sabal Trail is not just a local matter, as all the counties and cities that have voted resolutions against it demonstrate. It’s time for Gov. Deal and other elected and appointed officials, local, state, and federal, to oppose Sabal Trail.

Opponents are digging in for a long fight. Many initially submitted to the firm’s requests, some saying because they sensed it was inevitable, only to rescind it as opposition brewed.

You can still rescind permission to a pipeline company.

And it’s time for Gov. Deal to oppose Sabal Trail like he opposes the Palmetto Project.

Please call Gov. Deal today, and follow the link for how to ecomment to FERC and to contact your other elected and appointed officials.