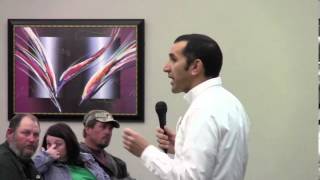 I called FERC’s John Peconom, who said there were no others scheduled of which he was aware. He added that these Open Houses were organizd by Sabal Trail. I pointed out that he was attending them for FERC, so presumably he would know if there were any others. He agreed that he would. I thanked him for saving me a lot of time trying to find others. So your two choices for Sabal Trail Open Houses this month are: END_OF_DOCUMENT_TOKEN_TO_BE_REPLACED