The cookout at Valdosta State made the news, with SpectraBusters.org No Pipeline signs.

Adrianna Taylor of SAVE [Students Against Violating the Environment] says, “We’re uniting all of the global divestment groups from across the world and trying to make a message to the fossil fuel industry and to local governments that we want change. We want you guys to divest from fossil fuels and make the switch to alternative fuels.”

Taylor also says the organization hopes the University will pledge not to invest any more money in fossil fuels.

Resolutions against the Sabal Trail pipeline have already been passed by Lowndes County, Valdosta, and five other counties and one other city (Albany) in Georgia and Florida. VSU divesting its fossil fuels would send another signal. 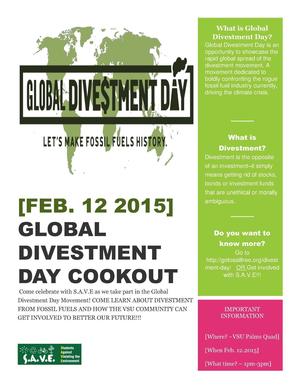 What is Global Divestment Day? END_OF_DOCUMENT_TOKEN_TO_BE_REPLACED

A fossil fuel needle desperately trying to get another fix hit an artery and leaked oily mud and methane into a creek near Beverly, Ohio, forcing evacuation of people nearby. Once again, state agencies had to deal with a problem caused by a private company. This collateral damage drew in yet another fracking opponent, this time one founded by an opponent of the first Superfund.

A Morgan County shale well being drilled in preparation for fracking began leaking on Sunday, forcing the evacuation of nearby residents.

State and federal environmental emergency-response teams and the drilling company finally contained the mess yesterday, but not before it reached a nearby creek.

The leak was discovered END_OF_DOCUMENT_TOKEN_TO_BE_REPLACED

$5.5 trillion or $800 for each human on this Earth has been dumped into the fossil fuel money pit. Will most of that money never come back out, now that solar stocks are skyrocketing and foundations are banding together to dump fossil fuel stocks? Why should we let Spectra Energy and NextEra gouge a methane pipeline through our lands for their bad investment?

By keeping their money in coal and oil companies, investors are betting a vast amount of wealth, including the pensions and savings of millions of people, on high future demand for dirty fuels. The investment has enabled fossil fuel companies to massively raise their spending on expanding extractable reserves, with oil and gas companies alone (state-owned ones included) spending the combined GDP of Netherlands and Belgium a year, in belief that there will be demand for ever more dirty fuel.

This assumption is being challenged by recent developments, which is good news for climate but bad news for anyone who thought investing in fossil fuel industries was a safe bet. Frantic growth in coal consumption seems to be coming to an end much sooner than predicted just a few years ago, with China’s aggressive clean air policies, rapidly dropping coal consumption in the U.S. and upcoming closures of many coal plants in Europe. At the same time the oil industry is also facing slowing demand growth and the financial and share performance of oil majors is disappointing for shareholders.

Nevertheless, even faced with weakening demand prospects, outdated investment patterns are driving fossil fuel companies to waste trillions of dollars in developing reserves and infrastructure that will be stranded as the world moves beyond 20th century energy.

The article is mostly about coal and oil, but it applies equally well to fracked “natural” methane gas: END_OF_DOCUMENT_TOKEN_TO_BE_REPLACED

The proposal to build a natural gas pipeline by Sabal Trail/Spectra Energy is unnecessary and, undoubtedly, not in the best interest of the citizens living along its path. Not only will the construction of this pipeline create safety issues and devalue the property of affected landowners, it also serves as an extension of the fracking industry responsible for contaminated groundwater in drilling areas. The externalized costs of the natural gas industry are far too detrimental to public health for this to be considered when the potential for solar power in our region remains largely untapped.

Furthermore, natural gas has been marketed as END_OF_DOCUMENT_TOKEN_TO_BE_REPLACED