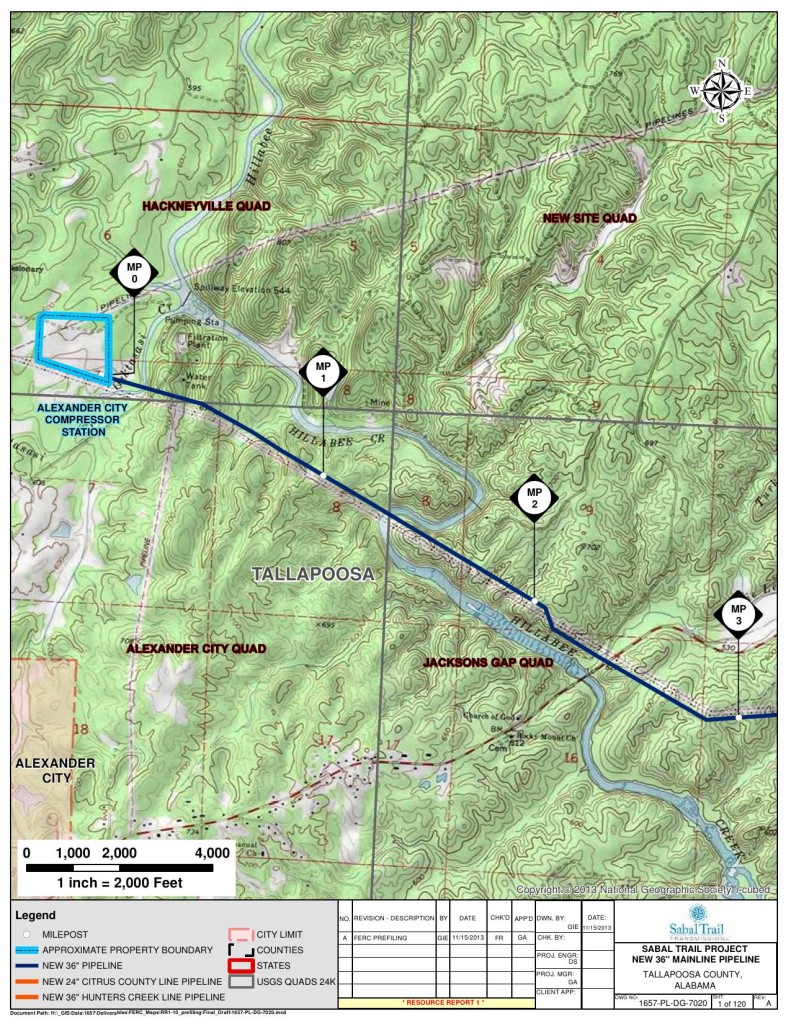 Andrea Grover, Spectra Energy director of stakeholder outreach, said surveys have been completed with landowners in the path of the proposed pipeline and environmental data is ready to be submitted to FERC.

“Now, we’re taking all of that data and getting ready to file that in our formal application to the Federal Energy Regulatory Commission. That will be sometime later this year,” Grover said. “Right now, we’re about 500 miles of pipeline with all of the re-routes and things that we’ve incorporated.”

That’s markedly different from what Spectra’s Grover told the Valdosta Daily Time 27 July 2014, that Sabal Trail planned to file formally with FERC at the end of October.

This change in target dates matches the delay implied by FERC’s announcement 15 October 2014 of a 15 November 2014 EIS comment deadline. So it seems opposition has busted Sabal Trail’s 31 Oct 2014 filing deadline.

And Ms. Grover, after many times claiming FERC had the only say, admitted to that Alabama paper that many other agencies have to provide permits for the pipeline to happen:

As for the proposed compressor station to be located near Brick Plant Road, Grover said it too would have to fall under the regulations of not only FERC, but other agencies throughout the state of Alabama.

“We will be building a new compressor station that will be near Alexander City, and it’s near a power plant there and along the current Alabama Power corridor,” Grover said. “Along with FERC, there are also other permits that we get through Alabama DNR or Fish and Wildlife, Army Corps of Engineer and others who also weigh in or consult on the project and make sure we’re following all of their regulations.”

Grover added that those regulations would include making sure the plant remains under a certain noise level.

“From a compressor station standpoint, they’ll be weighing on any of the typical emissions and making sure we’re below the limits according to regulations as well as noise,” Grover said. “FERC actually has a decibel level that we are not allowed to exceed, so part of our design work is to find out what’s the ambient noise at that station currently, what will our station be adding and making sure that noise level is below the 55 decibels that’s required there.”

She did, however, continue with the standard Spectra handwaving about “There’s a lot of different jobs that come with the pipeline going through the area”. Funny how Spectra never seems able to quantify those jobs. She said an economic study was being conducted, but not to be released until 2015. Which would be after her latest projected FERC filing date. How convenient!

Will it mention what Spectra admitted in Gilchrist County 20 February 2014 that they’ve already picked installation contractors, so locals can apply to be hired by those contractors. Apply, mind you: no mention of locals actually getting hired. In other words, Spectra has hired crews from Houston who will bat through in their RVs and move on like a plague of locusts, gouging their hundred-foot path of destruction.

Meanwhle, here is more about FERC’s formal filing process and other agencies and elected officials who can affect that process.

And here are some ways you can affect it.