Here’s why you should ecomment to FERC and your elected officials right now. 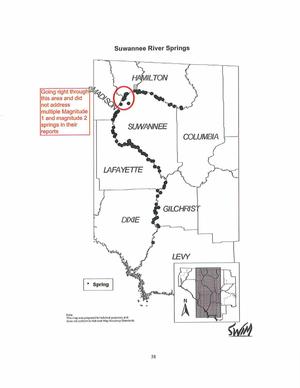 Sabal Trail filed key materials after FERC’s stated deadline, a Suwannee County, FL landowner points out in a FERC ecomment, also revealing Sabal Trail still didn’t address key springs upstream and down from its proposed new pipeline path, and said nothing about connecting caverns beneath the Suwannee and Withlacoochee Rivers.

Here’s a call to action from Merrillee Malwitz-Jipson:

I realize many of you have seen me (and a few others) navigate through a enormous amount of meetings, letters, social media announcements to stop the Sabal Trail Gas (fracked)Transmission Pipeline cutting through one of our most vulnerable areas of our World, the Florida Springs Heartland.

You have watched and read from the sidelines for nearly 2 years. It is time for you to act. Call it my END_OF_DOCUMENT_TOKEN_TO_BE_REPLACED

A portion of the resolution states, END_OF_DOCUMENT_TOKEN_TO_BE_REPLACED Sabal Trail and FERC would like everyone to believe state regulators have no say, but that’s just not true. It’s not even clear GA PSC has no say, considering that END_OF_DOCUMENT_TOKEN_TO_BE_REPLACED