Southern Company (NYSE:SO, and parent of Georgia Power) is in the process of buying END_OF_DOCUMENT_TOKEN_TO_BE_REPLACED 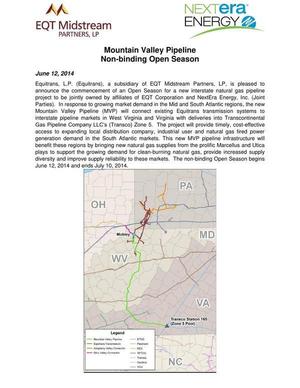 WGL Midstream has a END_OF_DOCUMENT_TOKEN_TO_BE_REPLACED

Are Spectra and FPL running short on money so they have to take on a new investor? Has the opposition cost them $225 million already?

The AP story includes two misconceptions. After protests continuing into this year, a criminal trespass lawsuit against Sabal Trail, and multiple parties filing amicus briefs, this is all AP remembers:

The pipeline drew protests from southwest Georgia residents last year, who said they do not want a pollution-emitting compression station near their homes.

Currently there are only two major pipelines that deliver natural gas to Florida. Both are nearing capacity.

Not if the Sunshine State gets on with solar power, like even the most corrupt state (Georgia) is doing.

Interestingly, there’s no press release from any of Sabal Trail, Spectra, NextEra, or FPL about this, but there’s this obviously slanted Duke Energy PR, 5 May 2015, Duke Energy buys 7.5% of previously announced Sabal Trail pipeline that will meet growing need for natural gas in Southeast U.S., END_OF_DOCUMENT_TOKEN_TO_BE_REPLACED

Sure, that paragraph doesn’t say END_OF_DOCUMENT_TOKEN_TO_BE_REPLACED

This was apparently the first report, by John Bruce, for The Recorder of Monterey, Highland County, Virginia, 7 August 2014, Spectra suspends pipeline proposal, END_OF_DOCUMENT_TOKEN_TO_BE_REPLACED

Emergency officials initially believed the rupture may have been caused by a mudslide. The line was END_OF_DOCUMENT_TOKEN_TO_BE_REPLACED 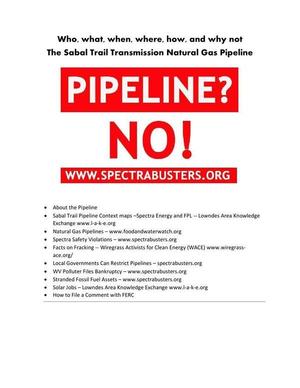 END_OF_DOCUMENT_TOKEN_TO_BE_REPLACED

The Associated Press requested data on drilling-related complaints in END_OF_DOCUMENT_TOKEN_TO_BE_REPLACED